Did you know that November is National Peanut Butter Lover’s Month? This means it’s the perfect time to savor the flavor of your favorite peanut butter goodies, whether you prefer fluffernutter sandwiches, peanut butter cups…or maybe just eating peanut butter by the spoonful!

If you’re looking for a new way to enjoy peanut butter during this extra-special month-long celebration, look no further than The Still’s dessert menu. On the menu, we offer an extra-special sweet treat that is bound to please peanut butter lovers: our fried pb+j sandwich. Here, we’re going to tell you a little bit more about this unique offering and why it’s the perfect food to help celebrate National Peanut Butter Lover’s Month.

As it turns out, November 4, 1895 was a red-letter day in peanut butter’s history: it was the day that Dr. John Harvey Kellogg (yes, like the cereal; more on that in a moment) applied for the first patent for peanut butter. In modern times, peanut farmers celebrate November as a month-long celebration of the little legume that has become a beloved part of American cuisine. 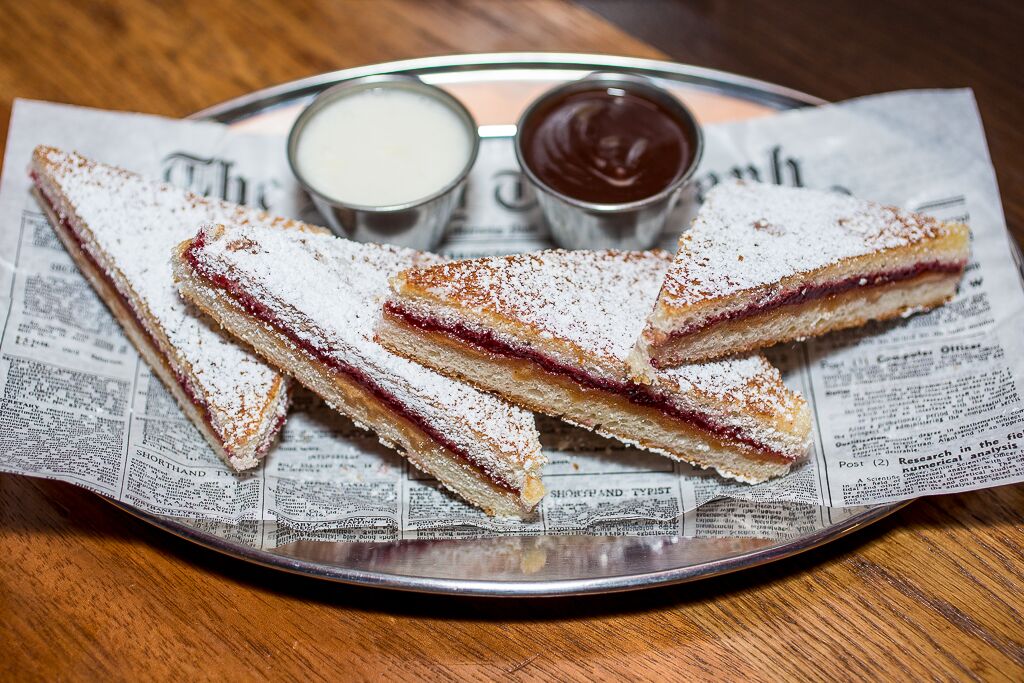 What is fried pb+j? As previously noted, one of The Still’s dessert offerings is our beloved “fried pb+j” sandwich. Of course, if you’ve never ordered this culinary masterpiece, you might be a little bit confused: isn’t pb+j a lunch food? What should you expect when you order?

In a nutshell, what you can expect when you order our fried pb+j sandwich is utter brilliance. However, we don’t want to leave you hanging, so let’s expand on that answer and explain how we bring the classic sandwich into dessert territory.

Our fried pb+j starts out in a fairly traditional way: with a soft white bread slathered with peanut butter and jelly. But from there, The Still veers a bit from tradition. The sandwich is griddled and fried to crispy perfection, then coated with sweet confectioners’ sugar. Then, since we never do anything halfway, we serve it with marshmallow creme and a Nutella dipping sauce. The preparation and the toppings transform a classic lunchbox favorite into a sophisticated dessert offering.

You’ll love this specialty dessert, which is simultaneously innovative and pleasingly nostalgic. Of course, everyone at the table will probably want a bite, so you’d better order some of our other famous dessert, deep fried oreos (made with birthday cake oreos coated in red velvet batter, and served with cream cheese icing) too, to keep everyone happy.

Celebrating National Peanut Butter Lover’s Month. To help round out the celebratory mood of this month, here’s a brief history of peanut butter and some fun facts to share with your friends while enjoying your next fried pb+j at The Still!

Peanut butter: a storied past. While the first patent for peanut butter was filed just over a century ago, the spreadable stuff has roots that go back much earlier. As it turns out, an early version of peanut butter was first developed and enjoyed by the Aztecs, who would grind peanuts into a paste which was then eaten. They were on to something, but the smooth (or crunchy) peanut butter we enjoy today wasn’t developed until much later.

In the late 1800s and early 1900s, several things happened that helped make peanut butter part of our daily routine. In 1884, a Canadian gentleman named Marcellus Gilmore Edson patented a peanut paste which was made by milling roasted peanuts between heated surfaces. In 1895, Dr. John Harvey Kellogg patented a process wherein he would create a butter from raw peanuts, which was touted as a healthy protein which was easily consumed by patients without teeth (yes, really).

By 1903, a doctor in St. Louis, Dr. Ambrose Straub, had patented a peanut butter making machine; about 15 years later, a chemist devised a process for making peanut butter that kept the oil from separating. The product took off, and the rest is flavor history!

Fun facts about peanut butter. Everyone loves trivia. Share some of these factoids with friends over your next fried pb+j at The Still.

One thing’s certain: America’s love of peanut butter runs deep. Come and enjoy our creative sweet-ified twist on a classic sandwich by ordering the fried pb+j dessert sandwich at The Still! It’s the perfect sweet finish to a meal and fun to share with friends.