As Benjamin Franklin is said to have written, “Beer is proof that God loves us and wants us to be happy”. There’s no doubt about it: beer has the power to give you a uniquely buzzy sort of happiness and warmth that kind of helps all your cares slip away in the most delightful way.

To our way of thinking, there’s no such thing as a bad day to enjoy a beer. But this Friday, it’s actually your civic duty to drink beer: October 27th is National American Beer Day! It’s the perfect day to come over to The Still and enjoy one of our many American beers: we have several on tap, and more available by the bottle and can. Here, we’ll supply you with all the info you need to enjoy this holiday in style, from specials at The Still to menu pairing tips to fascinating beer trivia that you’ll love sharing with friends!

We believe in America, and we believe in beer. To show our civic pride (and to simultaneously show our guests a good time), we’re offering $5 American draft pints all day on this Friday, October 27th! The menu above specifies the regional origin of each beer. Celebrate the many fantastic breweries in the USA on National American Beer Day! 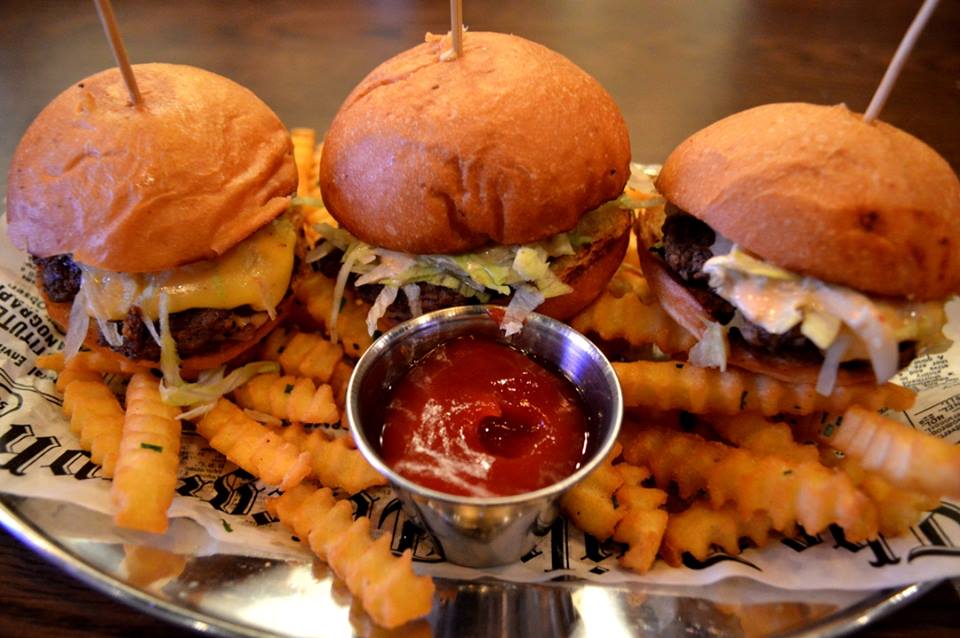 Beer + Food = a match made in heaven at The Still

At the “ultimate man cave” known as the Still, we know that food and the big game are both, simply put, better with beer. Here are some specific tips when choosing beer and food to ensure a stellar combination!

The good news is that beer’s buoyant bubbles actually work to make it harmonious with most foods. So if you have a favorite type of beer, don’t worry about it not being the right “fit” with a food–you really can’t go wrong!

That having been said, there are some combos that are accepted as being more perfect than others. Here are just a few examples of some of the American beers from our menu and what to pair them with:

Ale: This easy-drinking, lightly sweet, full-bodied style of beer is amber in hue. It’s great for drinking on its own, but it also pairs well with a great variety of foods from The Still’s menu. Some of our top picks for pairing with ales include our BBQ Chicken Quesadilla, Crispy Style Chicken Wings, Chicken Street Tacos, Beef Street Tacos, and our Mini Cheeseburgers.

India pale ale (IPA): A hoppy and assertively-flavored beer, India Pale Ale (often referred to simply as an “IPA”) has a nutty and slightly bitter flavor that many drinkers find to offer a pleasing contrast to food. It can “cut” through the richness of some foods, or it can pair well with the astringency of certain vegetables. Some of our menu picks to pair with an IPA include our Organic Mixed Greens Salad, Beer Battered Fish and Chips, and our Philly Cheese Steak Panini.

Wheat beer: An American wheat beer is typically brewed with at least 30 percent malted wheat. This gives it a light color and bright flavor which is ideal for summertime drinking but tastes great year-round. Its buoyancy makes it easy to pair with foods; we love it paired with our Tuna Poke Bowl, Grilled Chicken Brown Rice Bowl, and our Lobster Roll.

Lagers: Lagers bear some resemblance to ales, but different brewing techniques yield a flavor that is more crisp and less fruit forward. Lagers are a sort of “one size fits all” when it comes to pairing with food, because it seems that there are few foods that don’t pair well with them! Perhaps you’ll sample a lager with our Chips and Salsa or Guacamole, or maybe you’ll try it with our crave-worthy Chili Cheese Dog. Truthfully, you can’t go wrong!

8 fun and fascinating facts about beer

Need a conversation starter to get the party going on National American Beer Day? Look no further than this collection of fascinating facts about beer from the USA and around the world.

2. The highest-alcohol beer in the world contains 67.5 percent alcohol. To put that in perspective, most widely distributed beers in the USA hover around the 5 percent alcohol mark.

4. More than 40 percent of all Guinness beer is consumed in Africa. Nigeria alone is the #2 (in the world) consumer of the dark beer!

5. In the 13th century in Norway, baptizing babies in beer was a common practice.

6. The oldest brewery in the world has been in continuous operation since the year 1040. It’s called Weihenstephan, and it’s located in Germany.

7. Ever wonder why only bottled and canned beer is available on airplanes, but nothing on draft? Turns out, a traditional beer tap doesn’t work in airplanes: it will only dispense foam.

8. While it’s a commonly told tale that in Medieval times, it was safer to drink beer than water, this story has actually been debunked. However, it is true that beer was viewed as much more nutritious than water.

Three cheers for beer! We hope that you’ve thoroughly enjoyed this beer-ucation and that you’ve worked up a hearty appetite and thirst for the big day on Friday! Come join us at The Still to celebrate National American Beer Day on October 27th!

What’s your favorite type of beer?