For sports fans, it’s the ultimate trifecta: the game, cold beer, and hot chicken wings. At The Still, we offer the best of all three. Our 8,000 square foot space is the ultimate man cave, boasting an incredible 27 big screens on site, perfect for cheering on your favorite team. Our beer menu is extensive, with over 50 varieties, in addition to a comprehensive wine and cocktail menu. As for the chicken wings? You’ve never tasted anything quite like ours, which are perfectly crispy and come in a variety of different flavor options.

But have you ever stopped to wonder why this combination of beer and chicken wings on game day has become the standard? Who developed the crispy style of preparing chicken wings, and how did it become such a staple with watching sports? Here, we’ll explore the fascinating history of how crispy chicken wings were developed, how they became such an inherent part of the game day experience, and how to best enjoy them at The Still.

What are crispy chicken wings? Let’s get one thing straight. When we talk about the chicken wings that are served on game day, we’re referring not just to the part of the chicken but a specific mode of preparation. The classic game day style of preparing chicken wings involves deep frying the wings, and then drenching them in flavorful sauce.

Crispy-style chicken wings at The Still: At The Still, we’ve elevated this classic game day food to truly memorable fare. Our crispy-style chicken wings come in a variety of styles for every type of appetite, from traditional to slightly wild. The three styles on our menu are as follows: signature Buffalo-style, Spicy Korean style, and Classic BBQ style. You can order individual portions of our wings, or order for a crowd with our bucket of 75 wings for $99!

The history of crispy chicken wings. Deep fried chicken is nothing new. Fried chicken has long been a staple of southern cooking. But who had the brilliant idea to up the ante by deep frying and then drenching chicken wings in sauce? Turns out, this style of preparing wings, which is often referred to as “Buffalo” style, refers to the city in which the concept was popularized.

It happened in a place called the Anchor Bar in Buffalo, New York, in the early 1960s. As the story goes, one of the owners of this establishment cooked some leftover wings in hot sauce as a late night snack, and they were so well received that it was decided to add the item to the regular menu. Served with celery and a bleu cheese sauce, these so-called “Buffalo Wings” were an instant hit.

Family members of the bar in question and their hot sauce provider decided to capitalize on the popularity of this item to try to sell more hot sauce, and began promoting the idea with other establishments in the area. The menu item began to gain traction first locally, then nationally, then internationally. By the 1990s, Buffalo wings had really hit the big time and become world-known, gaining spots on fast food menus and becoming an internationally recognized style of preparation. 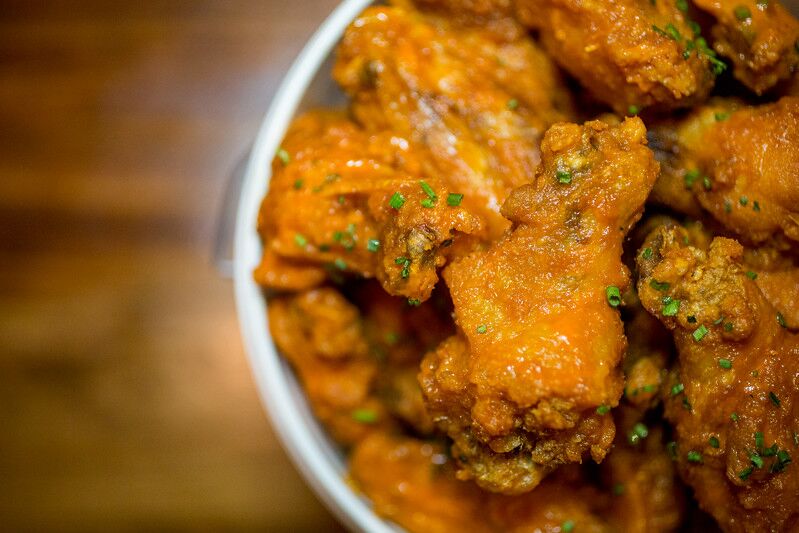 Chicken wings and the big game. OK, so now you’ve got an idea of where crispy chicken wings came from and how they reached the public eye. But how did they become such a big part of the game day experience? The short answer is: right place, right time. And…oddly enough, a little bit of dieting.

Wait, dieting? Yup. In the 1980s, when the low-fat food trend was at its height, there was an increased consumer demand for for boneless, skinless chicken breast. While this perceived “virtuous” part of the bird became very popular, the rest of the chicken was less in-demand at that time. As such, parts of the chicken like wings became very inexpensive. Preparing items like buffalo wings, which were made with a high quality yet reasonably priced ingredient, was appealing to restaurateurs. As a benefit, the spicy and salty nature of the fried chicken wings increased beer sales, because they’re such a natural pairing.

Meanwhile, around the same time, the presence of big screens in bars was becoming more and more popular. Desiring a meeting place to enjoy the game with friends on a better screen than at home, many sports fans began to gravitate toward taking in the game at bars. These separate things happening at the same time cemented the trifecta of game day, wings, and beer in culture. The rest is delicious history.

Hot wing challenge, anyone? If just a few is not enough, you may consider entering our incredible Bud Bud’s Hot Wing Challenge. Interested? Here are the rules:

And if you complete the challenge, what’s your reward? Your wings are on us, you receive a Still gift package and you will get your picture on our wall of fame.

It truly is the sports fan’s trifecta of perfection: the game, gold beer, and hot wings. Now that you understand the fascinating history of chicken wings and have an idea of how they became such an inherent part of the game day experience, you’ll enjoy The Still’s offerings with new appreciation. We hope to see you at The Still on game day so that you can taste our wings for yourself!