This Saturday, November 26th, is the annual rivalry football game between the UNLV Rebels and the University of Nevada Reno’s Wolf Pack. Nicknamed the Battle For Nevada, this game establishes bragging rights for the next year. While the Rebels are hosting right down the street, you can have a much better seat at The Still. With 27 high-def TVs and 8,000 square feet of room, there’s not a bad view in the house–and it certainly beats sitting in the nosebleeds! 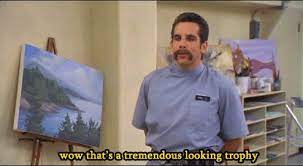 A lot of teams have a trophy that they pass back and forth between reigning champions, but no one else’s trophy is an actual cannon. The Battle For Nevada’s Fremont Cannon is the most expensive and heaviest trophy in college football. It’s modeled after a 19th-century Howitzer cannon that a frontier explorer, John C. Fremont, brought with him out West, but was abandoned in the Sierra Mountains in 1843 because, well, who wants to lug a cannon through the mountains? Locals say that the idea for a cannon for a trophy stems from a college prank back in the day, which just makes it even cooler. The cannon is real, too–they used to fire it when the defending champs scored a touchdown, but apparently, it no longer works. Another fun thing about the Fremont Cannon is that it’s painted with the winning team’s colors. You may not be able to run with an actual cannon, but this rivalry certainly took the idea and did.

Neither the Rebels nor the Wolf Pack have had a particularly stellar season, but that makes Saturday’s game all the more interesting. UNLV is currently 4-7 with Nevada limping in with a 2-9 record. While the Rebels are currently favored, the Wolf Pack are the defending champs, and legacy can have a lot of influence on performance. The unofficial state motto of Nevada is “battle born” after all. No matter who you are rooting for, Saturday is a great day for Nevadians to enjoy the timeless tradition of football, so grab a local Red Hydrant Brown Ale at The Still to show some Silver State pride. The game starts at 3 PM, so come down a little early to pregame and get ready for some football!